How Many Pennies In A Million Dollars

Ever wondered how many Pennies in a Million Dollars? Or how much is one million pennies? In this article we answer those questions and more. 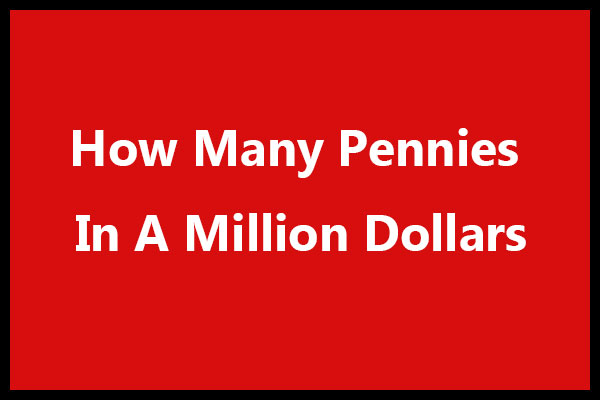 A million dollars is a lot of money. It’s hard to imagine how much it is, but we can use pennies to help us understand. It is relatively simple to understand how many pennies is needed to make $100, however, when we look at money in the millions, it can get confusing. It is important to note that 1 million pennies is not the same as 1 million dollars.

What Is A Penny?

The penny was first minted in 1793 and has been in circulation ever since. It was the first currency authorized by the United States from the Mint Act of 1792 signed by George Washington. The penny was originally made of copper, but it has been made out of zinc since 1982.

There are also some money superstitions about a penny.

What Is The Weight Of A Penny?

It is a well known fact that pennies minted in 1943 are valued up to $200,000 because of the high level of rare version of copper used in the minting process during that year.

It is worth noting that Lincoln pennies from 1943, were magnetic. The Lincoln pennies in 1943 were made with ferrous metals such as steel and zinc to save copper for ammunition during the world war which was happening at that time.

How to Calculate How Many Pennies In A Million Dollars?

How Many Pennies In One Million Dollars?

How Tall Would A Stack Of One Million Pennies Be?

How Much Does A Million Pennies Weigh?

This is a question that many people have asked themselves at one point or another. It is not an easy question to answer, but it can be done with some simple math.
As we know, a penny weighs 2.5 grams. A 100 million pennies weighs 250000 KG or around 551155.655 pounds.

How Many Pennies In One Billion Dollars?

See what a billion dollars looks like in cash

How Much Does One Billion Dollars Weigh?

How Much Is One Million Pennies?

How Much Is One Billion Pennies?

Who Was the Man Who Saved Pennies for 45 Years?

Otha Anders is a man who saved up pennies for 45 years. Anders filled five 15 gallon jugs with pennies over the course of 45 years accumulating thousands of coins through the years.

It took over 5 hours to process all the coins through a coin counting machine.

The Otha Anders penny collection was worth $5,136.14  Anders accumulated 513,614 pennies through collecting pennies for 45 years.

Anders saved over a half million pennies over 45 years, which works out at around $114.14 a year.