The Complete Guide to Six Characteristics of Money

Money is a system of trade that is used to exchange goods and services. It is a medium of exchange, a unit of account, and a store of value. In this post we explain the 6 characteristics of money. 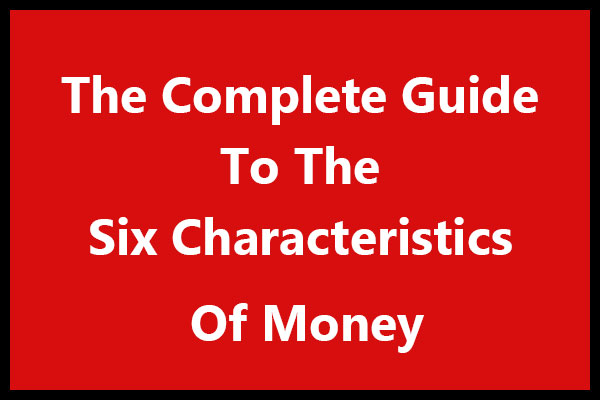 Money is a system of trade that is used as a medium of exchange. It is also a unit of account, a store of value, and a standard of deferred payment.

What Are The Six Characteristics Of Money?

The first characteristic that money must have is durability. Money needs to be able to withstand the test of time so that it can maintain its value over time.

characteristic that money needs to have is convenience. Money should not take up too much space or weigh too much so it can easily fit into your wallet or purse without being too annoying to carry around.

The second attribute of money needs to have is divisibility. Money needs to be able to be divided into smaller units so that it can be used for smaller transactions or purchases.

Money is a uniform thing. If you live in the US and go on a holiday to Nevada from New York City, you can use your dollars on your trip. The uniformity of money means you can use the same money no matter where in that country you use it.

There is a limited supply of money. Numbers are infinite, however money is not infinite. The more money that is printed the less valuable it will be. In the US, money is regulated by the Federal Reserve, meaning money will hold its value over time.

Money is accepted as a form of payment for debts. It is this acceptability that gives money its value. Cryptocurrency on the other hand is not accepted at most utilities for paying bills, therefore making money more valuable.

The Measurement and Value of Money

The value of money is a difficult thing to measure. It is not just the amount of money that you have, but also the worth of that money. The worth of a dollar can change depending on where you are in the world and what currency you are using.

See what 5 figures and 6 figures mean in money

What Are The Different Types Of Money?

Fiat currency is the most common form of money in the world. It is a currency that a government has declared to be legal tender, but it is not backed by a physical commodity.

Paper money is a type of fiat currency that has been printed on paper or another material like plastic. Paper money can be used as legal tender in many countries and regions around the world.

The physical attributes of a bank note are its size, color, and texture. These attributes are important because they can affect how people perceive the value of a bank note. For example, if a bank note is too small or too large it may be perceived as less valuable than other notes in circulation.

See also how many pennies make a million dollars

Money is a Medium of Exchange

Money is a medium of exchange that is used to buy goods and services. It can be anything from coins, paper money, or even digital currency. Money has been around for centuries and it has evolved over time.

Money is a Store of Value

Money is a store of value. It is a medium of exchange, a unit of account, and a store of wealth.

Money is the most important invention in human history. It has allowed humans to trade goods and services without having to barter or rely on inefficient systems like gold coins or cattle.

Money has been around for thousands of years and it will continue to be used for many more years to come.

Money is a Unit of Measurement

Money is a unit of measurement that is used to measure the value of goods and services. It is also a medium of exchange, which means that it can be used to buy things.

The word “money” comes from the Latin word “moneta”, which means “coin”. The first coins were made in Ancient Greece and Rome. They were made from gold or silver and had an image on one side, usually an emperor’s head.

Money can be a measure of social status and influence, see the the list of South African Billionaires

Money Can Be Redeemed to Obtain Goods or Services

Money is a medium of exchange that can be used to purchase goods and services.

Money is a medium of exchange that can be used to purchase goods and services. It is the most common form of currency in the world, and it has been around for centuries. Money is often referred to as “legal tender” because it has been declared by law to be valid for meeting financial obligations.

The use of money dates back to ancient times, when people would trade goods or livestock for other goods or livestock with the help of bartering. Eventually, people realized that they could use some type of object as a stand-in for these items, which led to the creation of money.

Money can be redeemed to obtain goods or services, which are typically priced in units of money. The most common unit of money is the dollar, but other currencies are also used as legal tender in many countries around the world.

Money can be transferred from one person to another person

Money can be transferred from one person to another person by using a bank account or a credit card.