It’s undeniable – the world in 2020 is, for better or worse, an international place. Whether you’re in business or simply want to plant flags beyond your jurisdiction, going global is near-essential.

To do so, though, transferring your capital internationally is inevitable. Paying vendors/remote employees, buying real estate – these are just a few things you can do abroad.

However, if you do these things through your bank, you’ll be paying far too much. The big fees they charge upfront is just the start. Unbeknownst to many, financial institutions hide the bulk of their FX profits in their exchange rate.

Almost every online money transfer provider offers a better deal than the banks. But, these days, there are dozens of services to choose from. Which one should you choose? In this article, we’ll list off ten of the best cash transfer apps out there.

Of all the money transfer apps, none loom larger than Transferwise. While they’re far from the oldest, they were the first to bring cheap cash transfers to the masses. After getting fed up with losing hundreds of Euro per month, their Estonian founders formed the company in 2010.

They stood out from the banks in a very profound way – they charged the interbank rate for currency exchange. Rather than bury a fat profit margin in their prices, they opted instead to charge a nominal transaction fee. It runs well below 1% – often, it’s around 0.5%.

Between that and their attention-grabbing exchange rates, they often give their customers the best returns in the industry. The cherry on top? Their user-friendly site design makes it easy to sign up and make transfers. Add their online “border-less” accounts to the mix, and you have a reliable FX option.

Transferwise is excellent for newbies. If you’re running a business, though, you’ll want to go with a firm like OFX. Founded in the late 1990s, OFX has become one of the world’s most trusted FX providers.

This Australian company is famous for having some of the tightest margins in the industry. Every year, they move approximately 20 billion USD for their customers. But, it’s their professional services that set them apart from their competitors.

They offer receiving accounts for online sellers, hedging tools, and access to dedicated dealers. Through these value-added services, serious entrepreneurs can save THOUSANDS of dollars per year.

Since the mid-2000s, World First provided competitive foreign exchange services to business clients. However, this brand has gotten tonnes of press lately thanks to its high-profile acquisition by Ant Financial.

Ant Financial is the financial services arm of Alibaba, one of China’s largest corporations. After a multi-year search, they found an FX provider that fit in with their expansion plans.

Despite this acquisition, they continue to provide cash transfers to customers in markets like the UK, Australia, and Japan. Their clients favour them because they consistently offer some of the best margins in the industry. Depending on the amount transferred, rates of 0.1% to 0.5% are possible.

Additionally, six major financial regulators license their operations. Because of this, big companies continue to trust this firm.

By virtue of its geography, the United Kingdom has long been at the forefront of the FX industry. When much of Europe switched over to the Euro decades ago, the UK kept the GBP. Combined with the fact that London is a global financial centre, and it’s not shocking they have loads of money transfer providers.

Of them, which one do Britons like the most? Surprisingly enough, Currencies Direct. Over the years, their fee-free, tight margin transfers have kept them competitive. However, it’s their exemplary customer service that has won over customers. Trustpilot has given them a Trust Score of 4.8/5.

MoneyTransferComparison.com also lauds them as the best firm specifically for sending money abroad. With an editorial rating of over 97%, you won’t find a better-rated FX firm on this review site.

Not everyone sends money internationally for business purposes. Some do it to improve the lives of their families. More than 164 million people live abroad primarily for work reasons. Every month, they send a portion of their paycheck home. The amounts (~200-500 USD) may not seem like much to us. However, in developing nations, these sums can make a huge difference.

Unfortunately, many remittance firms charge exorbitant fees on these small transfers. Morally questionable as this may be, it has created a massive opportunity for firms like Azimo. Azimo charges fees far less than its established competitors while offering lightning-fast transfers to more than 195 countries.

In the 2010s, WiFi became ubiquitous. In even lesser-developed countries, you can find places to connect to the internet relatively easily. This development fuelled the rise of remote work and the digital nomad.

However, while it has become easy to work abroad, banking has lagged behind. Every time you withdraw from ATMs or pay via card, you’ll pay massively unfair international transaction fees.

This issue is what prompted Nikolay Storonsky to found Revolut. This service allows you to pay for things abroad using the interbank rate, up to 8,000 USD per month. You can also withdraw 400 USD/month from ATMs for free.

While they have experienced bumps along the way, they have become a highly useful solution for frequent travellers.

When it comes to embracing new things, fear of change is one of the biggest barriers. If you’re marketing an app, how would you combat this tendency? In the case of TorFX, they made their onboarding process as painless as possible.

This strategy has driven the growth of their mobile app. They have a very user-friendly platform, and they’ve kept documentation procedures to a minimum. If you run into issues during the process, they’ll guide you through it.

Add in highly-competitive rates and excellent customer service metrics, and you have a robust money transfer app.

For some, experience trumps all. We’ll be honest – on its face, this isn’t the best way to evaluate a firm. For instance, Western Union’s been in business since 1851. However, they offer some of the worst rates in the industry.

If you want a combination of decades of experience, great rates, and usability, go with Moneycorp. They brokered their first trade in 1970, and have specialized in commercial FX ever since. Excellent reviews and numerous awards confirm it – Moneycorp is a top-tier FX provider for business clients.

If you use the internet relatively frequently, there’s a good chance you’re familiar with XE. Ever since the World Wide Web came online, XE.com has known as the currency site. Since 1995, they’ve published the interbank currency rates for every pairing out there. Because they did this, they made money transfer a more transparent activity. 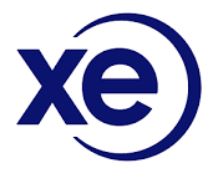 However, it took until 2015 for them to add an actual money transfer service. Euronet did this after acquiring XE. They merged HiFX, their existing internet money transfer provider, into this well-known brand.

Doing this was risky, as a lousy launch could have hurt XE’s name. Five years on, though, their rates and customer service have passed the test.

Another promising app based in the United Kingdom, CurrencyFair has attracted more than its share of fans. Above all, their transparency surrounding fees and margins have won over customers. While everyone appreciates honesty, Millennials, who are becoming increasingly dominant in the marketplace, hold it as a core value.

Of course, they also post rates that run close to marketplace leaders and offer excellent customer service. For this reason, they have hung on where other startups have failed.

There’s No Reason To Go Through Your Bank Anymore

If this post has done anything, it’s shown you that there are countless alternatives to your bank. You no longer have to rely on them to process international cash transfers. By using ANY of the above options, you can save THOUSANDS of dollars per year.