How to Bypass ISP Data Throttling

Have you ever been streaming a video or movie only for buffering to start half the way through? This restriction of download speed is more than likely the result of your internet service provider (ISP) throttling your data.

If you suffer from slow internet speeds at peak times, we will show you the solutions to bypass bandwidth throttling and help you better enjoy your internet experience. 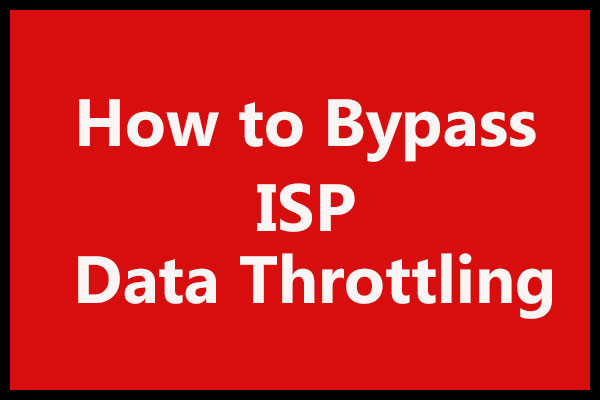 What does it mean to throttle data?

Data throttling or bandwidth throttling is the practice of your ISP intentionally slowing down or speeding up an internet service.

See also how to get free cable TV legally

How can I tell if my data is being throttled by my ISP?

The best way to check if your data is being throttled is to run an internet speed test and then run the test again using a VPN.

There are numerous websites that you can use to check the speed of your internet including:

Speedtest.net provides an accurate representation of your internet speed. It is run by Ookla LLC who also run Downdetector.

This free speed test can be used to give you an overview of your download and upload speeds offered by your internet  service provider.

Bandwidth Place is a free internet speed test website that offers accurate insights into your download and upload speeds.

This website also offers a comparison between the various providers in your area so you can get an overview of what ISP offers the best internet service near you.

Learn how to get free Google Drive space

Fast.com is a free speed test powered by Netflix to give you an overview of your internet speed for streaming TV shows and movies.

How do I stop data throttling?

The most common way to stop data throttling is to use a Virtual Private Network or VPN. A VPN will encrypt traffic meaning it is virtually impossible for your ISP to see it. A VPN hides data going from the server to the receiver, therefore your ISP cannot tell where the internet traffic is going making it impossible to throttle that data.

Will a VPN stop throttling?

A VPN will help your bypass data throttling by your ISP. However, it is worth noting that your internet speed will depend on the limits set by the VPN provider.

AT&T are known for throttling bandwidth over the years. The company received a fine of $60 million to the Federal Trade Commission for throttling plans. In 2021 the company stated that there would no longer be any instances of throttling with their Ultimate Elite plan.

It is well known that Sprint throttles data for users who use too much data. The unlimited plans offered by the ISP are said to throttle data after 50 GB of usage.

Verizon are known to have an aggressive data throttling strategy and have in the past limited bandwidth for Netflix and YouTube users.

Dats throttling by internet service providers is legal, however the Federal Trade Commission (FTC) has stated that “throttling may become may become illegal if companies limit their customers’ Internet speeds in a “deceptive or unfair” fashion.

How to bypass ISP throttling?

Using a VPN is the best and easiest solution to bypass ISP throttling. When considering a VPN it is important to go with a reputable VPN brand.

There are free solutions and often shady VPN providers appear on internet forums. Would you trust an unfamiliar brand with your data?

There are VPNs that have a good reputation including:

If you do not want to use a VPN to bypass data throttling, there are alternative solutions.

Learn how to bypass the Patreon Paywall

How to bypass ISP throttling without a VPN?

One of the best ways to bypass data throttling is to contact your ISP support. If you provide screenshots of your current data speeds and what you should be receiving they may ease the level of throttling on service.

Another solution is to contact your ISP sales to renegotiate your internet plan. This may or may not work, but in most cases for an ISP it is easier to offer a better plan than risk losing a customer to a competitor.

While Tor encrypts your data in general can be slow regardless of what ISP you are using. While Tor is a free option, your download speeds are going to be very limited when compared to a premium VPN service.