What Is The Very Last Number In The World

Ever wondered what is the very last number in the world? Is there are last number on Earth? In this article we will help you better understand the concept of whether or not numbers ever end. 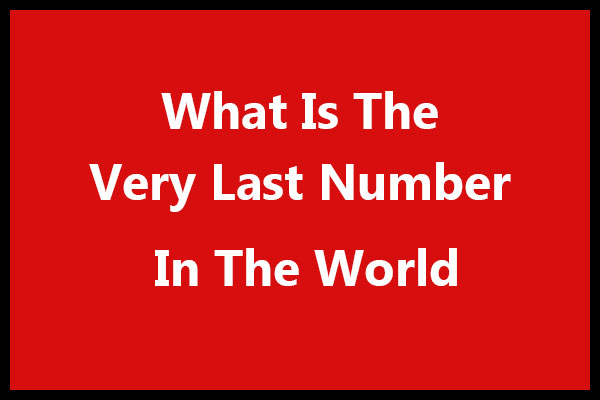 What is The Last Number In Numbers?

There is no last number in the world. There are infinite amount of numbers, meaning numbers go on and on and never end.

Infinity is a concept that is difficult to understand. It is the idea that numbers go on for infinity.

Infinity can be described as an endless amount of something. For example, there are an infinite number of numbers in the world.

Here is a quote to understand the idea of infinity in terms of numbers:

Learn more about what figures are in monetary terms

What is The Second Last Number In Numbers?

There is no second last number in the world, similar to the fact that is no last number. Numbers are simply infinate in that there is no end to numbers.

What Is the Biggest Number In The World?

A Millinillion is the term for the largest number in the world. It is represented as 103003

At this time a Millinillion is known as the biggest written number in the universe.

A Googol is a well known term for one of the largest number in the world at this time. A Googol, not Google, is a number with a hundred zeros.

A Googol is not the last number in the world because you can add a thousand zeros, even a billion zeros to the end of a number and still not reach the end of the range of numbers.

See how many pennies are in one million dollars

How Many Numbers Are There In The World?

There is no limit as to the number of numbers that there are in the world. Numbers go on to infinity, hence they never end.

Why Do Numbers Never End?

In mathematics, infinity is a concept describing something without any bound or end.

One of the most important things to understand about infinity is that it is not a number. It can’t be added or multiplied with other numbers. But it can be written as a number with an infinite number of digits after the decimal point.

Infinity has been used in different areas of mathematics, science and philosophy for centuries.

How To Write Googol Number?

The number was named he term Milton Sirotta who was 9 years old at the time and nephew of U.S. mathematician Edward Kasner.

Is Google a Number?

Google is not a number, it is a search engine. The Number is spelled Googol. Google and Googol sound similar but are two different things.

What Is A Googolplex?

What is Rayo’s Number?

Rayo’s number has been on occasion declared as the largest number in the world at MIT in 2007. Agustin Rayo a Mexican professor gave the following definition:

“The smallest number bigger than any finite number named by an expression in the language of googol symbols or less.”

When Was Rayo’s Number Invented?

Rayo’s number was coined on 26 January 2007 at a big number duel at Massachusetts Institute of Technology (MIT).

What Is The Last Number In Maths?

There is no last number in Maths, however a Googolplex is represented as the largest number. It is written as 10googol,.

What Number Is Infinity?

There are no numbers to represent infinity as it is not a tangible concept.

The symbol for infinity is represented as: ∞

What is Infinity Minus Infinity?

Infinity is a concept that is often used in mathematics, and it is typically defined as the quantity that has no end or limit. It is a number that can be used to represent any number larger than any other number.

We can think of infinity as a never-ending sequence of numbers, such as 1, 2, 3, 4…etc. But what would happen if we subtract one from infinity? This would give us -infinity.

The answer to this question will depend on how we define the concept of infinity. If we consider infinity as an infinite amount of numbers (1, 2, 3…), then subtracting one from it would give us -infinity because there are still numbers after ‘1’.

The answer to this question is a paradox. Infinity minus infinity is undefined because it does not exist.

What Is After Infinity?

The concept of infinity has been a part of mathematics for centuries. But it is not until recently that we started to understand the true nature of infinity.

What Is The Last Number Before Infinity Called?

Because there is no exact number to define infinity, there is therefore no last number before infinity.

Is Eternity Bigger Than Infinity?

Eternity is a long period of time that has no end. Infinity is a concept used in mathematics to represent something without any boundaries or limits.

In the context of the question, eternity is bigger than infinity because it has no end, while infinity has limitations and boundaries.

What Is The Smallest Number In The World?

The Smallest whole number is 0 or Zero.