What Age Is Over The Hill

Have you heard someone say they are over the hill but not sure what it meant? Over the hill is a reference that people make about certain ages that are beyond youth. What age is considered over the hill? 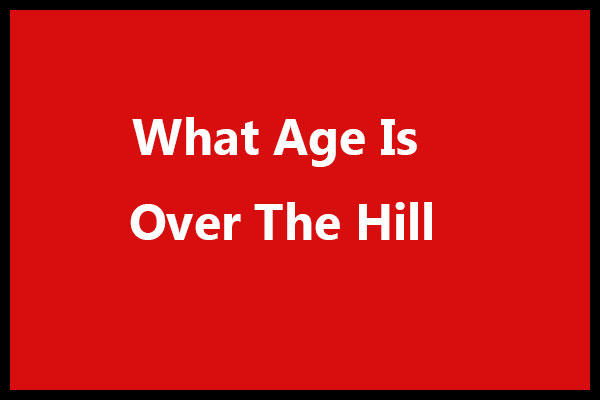 In this article we discuss what it means to be over the hill and what age can someone justify suggesting is over the hill.

What is Over the Hill?

Over the Hill is a term that has been used in Western culture for decades. It is typically used to refer to a person who has reached a certain age and no longer feels youthful. The term can be considered derogatory or empowering.

In some cases, it is used as an insult directed at older people, but it can also be used by an older person themselves to describe themselves and their new perspective on life.

What Age Is Over The Hill?

Over the Hill is a term typically used to describe an individual who has reached the age of retirement.

This phrase is also used when someone reaches a certain age, such as 40 or 50. This meaning can be seen as derogatory and offensive by older individuals, who are likely to feel they are still capable of performing their job well.

What are the Benefits of Aging Gracefully?

Aging gracefully is a term used to describe the process of aging in a healthy and happy manner. As we age, some of us may experience more difficulties than others. However, with the right outlook and attitude, we can keep our minds and bodies healthy as we grow older.

There are many benefits to aging gracefully as opposed to not doing so. The most obvious benefit is that it can save you money for medical care in the future if you maintain your health and well-being now. Another benefit is that it can help you live longer since maintaining good health can lead to longevity.

The more we age, the more wisdom we gain. We are able to reflect on our lives, and see how far we have come. This is a great time to find new passions and hobbies that you didn’t have time for when you were younger. It’s also a perfect time to take care of yourself in ways you couldn’t before, such as improving your health or starting a new exercise routine.

Aging gracefully is about embracing the process of getting older and all that comes with it. It’s about making the most out of every day and taking advantage of all that life has to offer – from its joys to its challenges.

What are Some Ways to Age Gracefully?

We are living in a society where aging is not welcomed. Youth is glorified and older people are not given the same respect that they deserve. The pressure to look young can lead to some very negative effects on our mental health. In this article, we will explore some ways to age gracefully and how to look younger without resorting to surgery or other extreme measures.

Aging gracefully is more than just a physical process. It also includes the mental, emotional and social aspects of our lives.

2) Set goals for yourself

5) Make time for reflection in your life

The Term “Over the Hill” – Who Came Up With It and Why?

The term “over the hill” came into popular use in the 1920s as a phrase to describe an older person who no longer has any vitality.

The term “over the hill” came into popular use in the 1920s as a phrase to describe an older person who no longer has any vitality. The phrase was first used by American newspaper columnist, Arthur Brisbane, in his 1922 column for The New York Evening Journal. He wrote, “When a man reaches what I call the age of over-the-hill he is at that time entitled to some privileges which are denied him when he is on his way up.”

It was not until almost a decade later that this phrase became more widely used and it was attributed to another writer, Frank Crowninshield.

The term “over the hill” was coined in the 1940s by an advertising agency. It was a phrase that was used to describe the age when a person is no longer considered desirable by advertisers.

The term “over the hill” is used to describe a person who has passed their prime and is no longer desirable to advertisers. The phrase was coined in the 1940s by an advertising agency.

When Is a Person Considered Over The Hill?

The term “over the hill” is quite vague and there is no clear cut off point of when a person is considered over the hill.

The person’s physical health, mental health and their interests also have a big impact on when they are considered to be over the hill.

A person is considered over the hill when they are no longer able to do their job as well as before. This can be due to a number of factors including age, fatigue, or even just a new generation that is better at the job than them.

What Are The Benefits of Being Over 50 or Older?

Being over 50 or older has many benefits. It is important to remember that there are many ways for an older person to stay active and healthy. The following list of benefits is just a few of the many possible reasons why being an older adult is great.

Being 50 or older has its own benefits, and it’s not just about being able to retire.

The older you get, the more you realize that life is a journey. You learn more about yourself and your values. You are less likely to be swayed by peer pressure. You have more life experience to draw on when making decisions, which means you’re better at problem solving and decision-making. And if you’re over 65, it’s a good time to start thinking about retirement planning.

There are also many health benefits of being an older person: A recent study found that people over 60 who have been diagnosed with diabetes can lower their risk of developing heart disease by exercising regularly and maintaining a healthy weight.

What Age Is Considered Old?

It is difficult to pinpoint a specific age that is considered old. Some people are still in their 20s and they feel like they are old. It all depends on the person and their lifestyle.

Age is a term that is used to describe the number of years a person has been alive.

The word “old” is used to describe a person who is over the age of 65.

Is 40 Considered Over The hill?

There are many myths about what it means to be over the hill. One of these is that 40 is considered the age of retirement. However, this can’t be further from the truth. The majority of people are still working after they turn 40, and there are many reasons why they do so.

The first reason is that people have a longer life span than they did in previous generations, so they need to work longer to save up for retirement. Another reason is that people don’t want to retire because they enjoy their job and feel like it’s more fulfilling than sitting at home all day. Finally, there’s a sense of achievement when you’re able to work for as long as you want – or until your body gives out on you!

It is a common misconception that 40 is the age when you are ‘over the hill’. This is not the case. You can still be in your prime at 40 and have a lot of life left to live.

The term ‘over the hill’ refers to a steep uphill climb, which usually comes with age and experience. It doesn’t mean that you can’t do anything after 40, but it means that you need to work harder than before to accomplish your goals.

Is 50 Considered Over The Hill?

Aging is inevitable and it is a natural process. We should not worry about how old we are. Instead, we should focus on the things that make us happy and keep us healthy.

Is 60 Considered Over The Hill?

In America, the average life expectancy is about 78 years old. This means that most people are considered “over the hill” by age 60.

This is a difficult question to answer. Some people think that 60 is the new 30, while others believe that it is not.

The answer to this question depends on who you ask and what their age is.

Is 70 Considered Over The Hill?

There are many misconceptions about the age of 70. Some people believe that it is a time for retirement, but the truth is that it’s not too late to start a new career path.

As long as you are healthy and have an active lifestyle, you can still enjoy life to the fullest even at 70.

Is 80 Considered Over The Hill?

Research shows that the human brain is at its best between the ages of 18 and 25. But this does not mean that people over the age of 80 are less capable than their younger counterparts. In fact, some studies suggest that there are more benefits to being older than there are disadvantages.

The article talks about how people over the age of 80 have an advantage in certain mental tasks such as memory retrieval and problem solving, while they might be slower in other tasks such as processing new information or multitasking.

For example, if you are in the construction industry and you have been working for 60 years, then it is not likely that you will be able to work for another 10 years. But if you are a CEO of a company and have been working for 80 years, then it seems like your job will not end anytime soon.
In conclusion, we can say that it is all about how you use your brain and what you do with it.

What Age Is Over The Hill Party?

There are no strict rules about what age people should stop going to parties, but it usually ranges from 40 to 50 years old.

In the United States, over hill party typically refers to a celebration for one’s 50th birthday.