Oceans make up 72% of the Earth’s landmass and unfortunately plastic pollution is hugely affecting our waters and the species that depend on the oceans for survival. 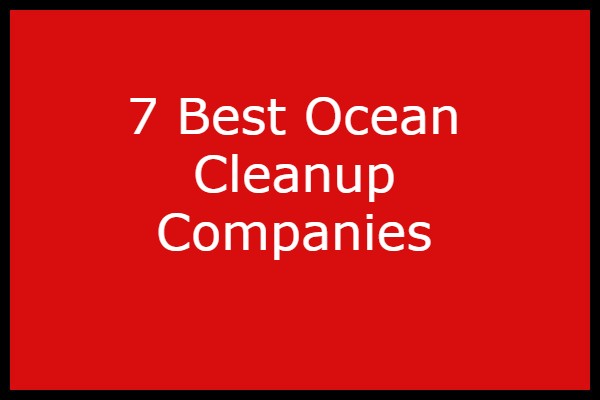 As the threat of our oceans from plastics and other sources of waste is gaining public attention. As a result of ongoing awareness campaigns there are several innovative companies who are helping to clean up the oceans.

We have all heard about the pacific garbage patch and how waste is collecting there every minute. The companies mentioned below are working towards preventing the growth of this continent of litter.

How large is the Pacific Garbage Patch?

The Pacific Garbage Patch is estimated to cover the surface area of 1.6 Million square meters or twice the size of Texas.

Where is the Pacific Garbage Patch Located?

The Pacific Garbage Patch is located halfway between Hawaii and California in the Pacific Ocean.

How many animals die in the Great Pacific Garbage Patch?

It is estimated that over 100,000 marine species die from getting tangled in the litter and from ingesting plastic.

In this article we look at the best ocean cleanup companies in 2021.

Ocean Cleanup is the largest ocean cleanup non profit and probably the best known. This Dutch company has set out a mission to collect 90% of the plastic from the worlds oceans by 2040.
Ocean cleanup continue to develop advances technologies that clean up our oceans and rivers.

Another important ocean cleanup company is Cleaner Ocean Foundation Ltd is a research non-profit who look into ways of filtering out plastics from rivers and seawaters and developing ocean awareness initiatives.
The BMS SeaVax project has been passed on to the Cleaner Ocean Foundation but they require significant funding for the project to continue.

Ichthion have 3 revolutionary solutions to gather plastics from rivers and oceans called Azure, Cobalt and Ultramarine. The ocean cleaning solutions include the Azure which is a barrier system for rivers and streams to prevent waste from reaching the ocean.

Cobalt is a self cleaning technology that extracts pollution while “Ultramarine” is fitted to shipping vessels to collect waste from oceans and large rivers.

Ichthion’s solutions have been revered worldwide for the advancements in technology to clean up our oceans.

The Great Bubble Barrier is a Dutch solution that generates bubbles to push plastic waste and litter to the water surface for collection. The solution installed in canals and rivers prevent plastic pollutants from reaching the oceans.

Another not for profit company whose goal is to clean up the oceans. Founded in 2017 in Florida, USA, the company sell bracelets, apparel, cell phone cases and more made from recycled material.

The company tag line is “very bracelet purchased funds the removal of one pound of trash from the ocean and coastlines.”

The Seabin Project was set up to provide a practical and tangible solution to reduce the plastics from the oceans.
The idea behind the Seabin project is to set out an innovative floating bin solution in marinas and docks which move up and down with the tide. The bins suck in large portions of later collecting debris and contaminants such as oil.

The team at Moneyjojo would like to commend all those top ocean cleanup companies who are doing their part to save our planet, and life above and below our seas.